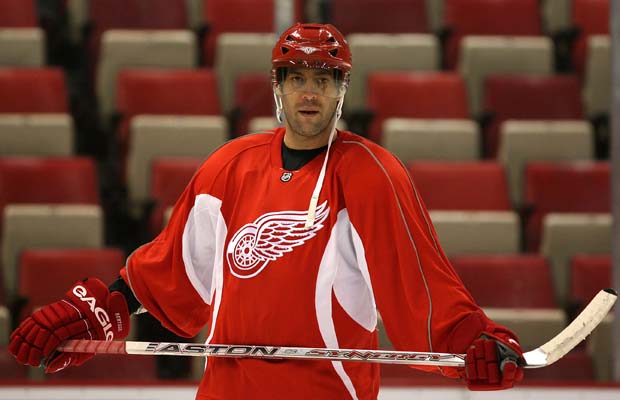 The 2012 OHL Priority Selection will be conducted online on Saturday, April 7. With the sixth choice of the draft, Guelph Storm GM and Vice President Mike Kelly along with his scouting staff will certainly have the opportunity to add an elite player to the club for what looks like an exciting season in 2012-13.

GuelphStorm.com looks back at OHL Priority Selections in team history including several that were headed by Kelly during his last tenure with the Storm.

The Hamilton Dukes made the move to Guelph following a 17-43-6 season that left them 13th out of 16 teams.  The OHL’s 1991 Priority Selection was held at the Kitchener Memorial Auditorium, where the Detroiit Compuware Ambassadors selected Todd Harvey with the first overall selection.

Three picks later, General Manager Mike Kelly would make Storm history with the team’s first ever pick when he called out the name of Todd Bertuzzi (pictured) from the Sudbury Midgets.  The 16 year old power forward took some time to adjust to the OHL picking up only 7 goals and 14 assists in his first campaign.  It was the Storm’s second round pick Sylvain Cloutier, who was a year older than Bertuzzi, that made the biggest impact in his rookie season picking up 66 points in 62 games to earn the club’s Rookie of the Year Award.

A total of six players selected by the Storm that day went on to play in the OHL.  Bertuzzi continues to play in the NHL, while Cloutier had a long pro career including a brief seven game stint with the Chicago Blackhawks.  One other player selected in 1991 went on to play 155 games in the NHL.  Taken one round after Cloutier, Steve Halko opted to play at the University of Michigan and eventually spent parts of six seasons with the Carolina Hurricanes.

Below are the Guelph Storm’s 1991 OHL Priority Selections picks.  The combined Guelph Storm and CHL totals for the 17 players selected that day are at the bottom of the table.