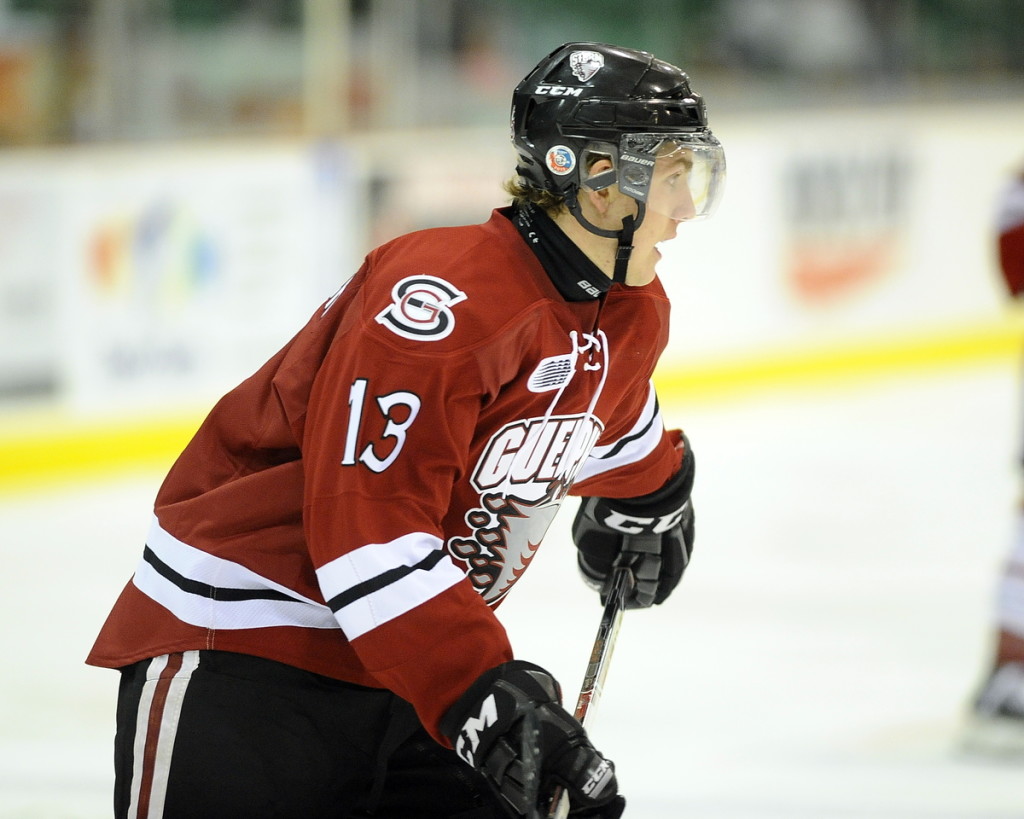 Nick Baptiste scored a pair of goals, and Alex DeBrincat notched three assists as the Erie Otters downed the Storm 4-3 on New Year’s Eve at the Erie Insurance Arena.

The Storm were looking to cap off a historic 2014 in style on the last day of the year, but fell victim to Erie’s talented crop of forwards.  The Otters fired 39 shots at Justin Nichols, who was once again stellar in the Storm net.

It was the Storm opening the scoring early on, with Adam Craievich converting a Marc Stevens pass just 2:20 into the first period.  Back and forth action prevailed for the rest of the opening frame, and with the Storm unable to capitalize on a high-sticking double minor incurred by Erie forward Shaun Bily.

The Otters began to impose their will early in the second period, and the game was broken open during a three-minute stretch in which the home side struck three times.  A one-timer from Nick Baptiste tied the game on the power-play at 12:56, and just two minutes later the Otters took the lead, thanks to a goal from 2015 draft eligible Dylan Strome.   Trent Fox extended the lead to 3-1 at 15:56, and the Otters led by that margin after two periods.

Early in the third, the Storm’s top line started humming as Tyler Bertuzzi placed a perfect shot right underneath the crossbar to cut the lead to 3-2, as the Storm began to push back.

Nick Baptiste restored the Otters’ lead at 14:23 on a great play from Alex DeBrincat, who was a catalyst all night for the home team.

The Storm once again attempted a comeback late in the game, as Jason Dickinson notched a power-play goal to cut the lead to 4-3, but Daniel Dekoning held strong in the final minute to preserve the victory.

– Storm forward Nicolas Sicoly played in his second OHL game, and first since being recalled from the NOJHL’s Soo Thunderbirds last week.

– Tyler Bertuzzi earned third-star honours with a goal and an assist, his 14th multi-point game of the season.

– Luke Cairns had an assist on Tyler Bertuzzi’s third period goal and now has 11 points in 11 games since joining the Storm in early December.

– Ben Harpur played tonight after having left Sunday’s game against Barrie due to a high-stick.

– Phil Baltisberger returned to the Swiss lineup at the World Junior Championship, after having left on a stretcher during Sunday’s game against Russia.

– The Storm return to action on Friday night at the Sleeman Centre v. the Owen Sound Attack.  Tickets are available by clicking HERE.