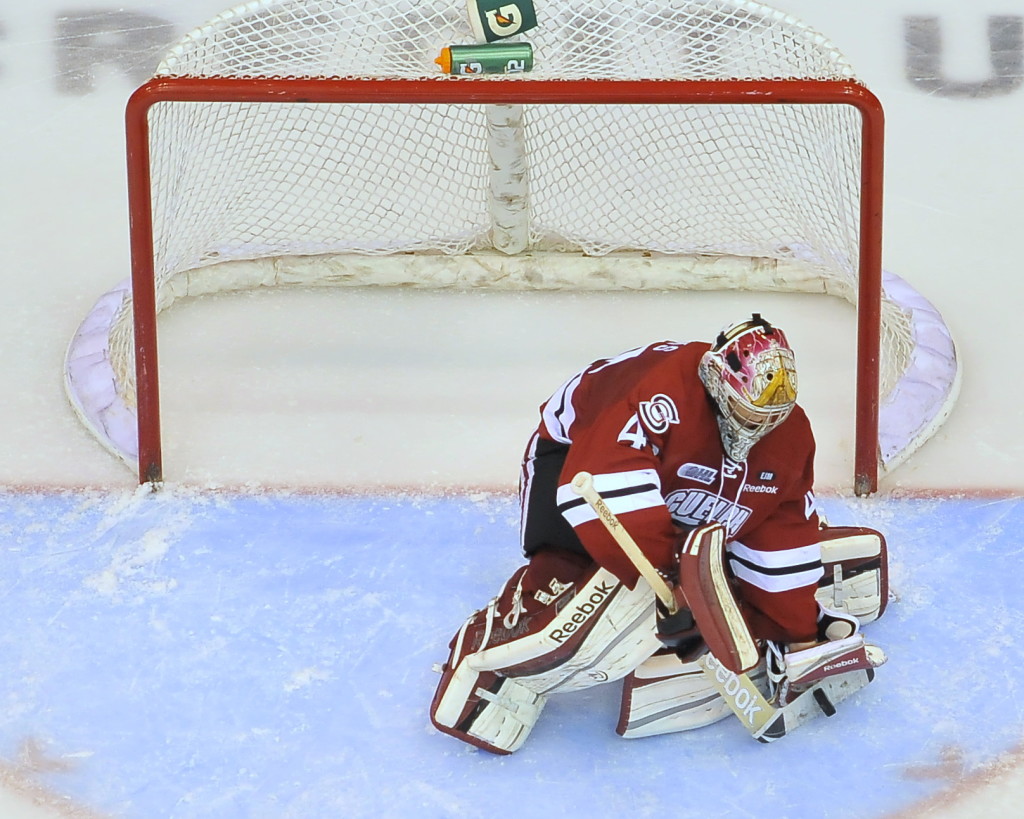 A Sunday afternoon crowd of 4,033 watched the Storm outmuscle the talented Sarnia Sting on their way to a 3-1 win.

First period goals by Hunter Garlent and Zack Mitchell proved to be all the offence that the home side needed as Garret Sparks was stellar between the pipes in another first star performance stopping 35 of 36 shots.

With the crowd settling into their seats, Garlent opened the scoring when Scott Kosmachuk sent the rookie centre and Patrick Watling on a two-on-one rush.  Using his winger as a decoy, Garlent snapped a quick shot over JP Anderson’s shoulder at the 23 second mark.  While the Sting pinned Guelph in their zone for much of the next 15 minutes, it was the Storm that struck next as Mitchell finished a pretty two-way passing play with Frank Menard to double the lead to 2-0.  Unable to convert on their first 15 shots on Sparks, the Sting finally found the back of the net with only 11 seconds remaining in the first on a powerplay goal by Connor Murphy.

The middle twenty was even on the scoreboard, but once again the visitors controlled much of the action and owned a 12-3 edge in shots on goal.  The Storm had a golden opportunity to add to their lead with 50 seconds of five-on-three, but the momentum quickly turned when Matt Finn was whistled for a pair of minor penalties.  When Charles Sarault stepped out of the box, Sarnia owned an extended powerplay but some great work down low from Ryan Horvat helped Guelph kill off the man advantage.

Playing their second game in less than twenty-four hours, while Sarnia was well rested, the Storm had every reason to let up in the third, but it was easily their best frame of the day.  Outshooting the Sting 14-8 and winning virtually every puck battle, the Storm found themselves on another two-man advantage and this time they capitalized.  Menard added the insurance marker when his centering feed caught a Sarnia stick and jumped over Anderson at 17:18.  A late holding call to Stephen Gaskin gave Sarnia life, but Sparks stopped each shot and solid team defence cleared away every rebound as Guelph hung on for the 3-1 victory.

With the win and a loss by the Soo Greyhounds, the Storm kept pace with sixth and seventh place Windsor and Saginaw and jumped ahead of the Hounds into eighth in the Western Conference.

A busy weekend awaits Guelph beginning with a Friday night test versus the high powered Niagara IceDogs at the Sleeman Centre.  One night later they’ll travel to Owen Sound to face the Attack before finishing their three-in-three weekend at home on Sunday afternoon versus the Kitchener Rangers.