Storm rally from two goals down to beat Whalers 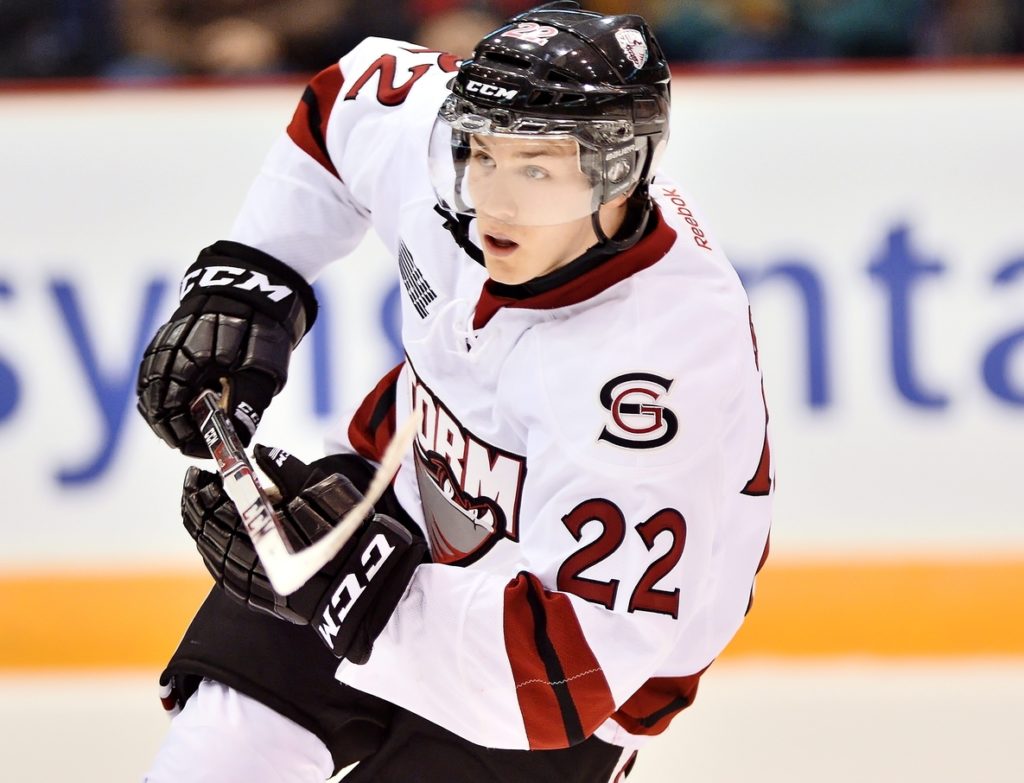 The Guelph Storm rallied from a two-goal deficit to beat the Plymouth Whalers 4-2 and grab their first home win of the season on Friday evening.

The Storm welcomed Jason Dickinson back to the line up who provided an immediate boost to the offense. Dickinson missed the first two games of the season while playing pre-season hockey for the Dallas Stars.

He made his presence felt by contributing a goal, an assist and outstanding two-way hockey for the whole game.

Pius Suter was also outstanding for the Storm. The Swiss-import forward buried two goals, including the game winner, and had an assist in the victory. The three-point total is a career high for Suter.

But it took a while for the Storm to get their footing.

The Whalers controlled most of the play for the first half of the opening period. In fact, it took Guelph 12 minutes just to register their second shot on net.

Plymouth capitalized on their strong defensive play by scoring first. Matthew Campagna opened the scoring with a quick strike in off a face-off to put the visitors up 1-0.

The game picked of pace dramatically in the second period.

A skirmish between the two teams at the end of the first period resulted in a 5-on-3 advantage for the Whalers to begin the middle frame which sparked a flurry of action.

It only took 20 seconds for Victor Crus Rydberg to put the Whalers up 2-0 with a power play snipe.

But just when it looked like Plymouth would start to pile on the pressure, the Guelph Storm turned it around

Just moments after the Crus Rydberg marker, while still shorthanded, Pius Suter caused a turnover and sent a puck to centre ice where Jason Dickinson scooped it up and cut the Plymouth lead in half.

The Storm didn’t stop there.

Just two minutes later, Stephen Pierog cut across the slot in front of the Plymouth net and sniped one passed Nedeljkovic to knot the game at two.

The penalty parade continued throughout the period, with Plymouth getting four straight power play attempts in the middle frame.  The Storm penalty kill was up to the task. Despite allowing an early 5-on-3 goal to the Whalers, Guelph’s defense was on lockdown for the middle frame, allowing only four shots on goal.

The Storm had their opportunity to shine on special teams to start the third. Two late second-period Plymouth penalties gave Guelph a 5-on-3 chance of their own.

Even though Guelph couldn’t capitalize on the great power play opportunity, the disappointment didn’t last long.

With Whalers sprawled all over him, a falling Jason Dickinson managed to slip the puck through a defender to the front of the net to Pius Suter. The second year Swiss forward made no mistake, going five-hole on Nedeljkovic to put the Storm up 3-2.

Suter struck again late in the third. Jason Dickinson fired an initial shot on net and Suter was right on the doorstep to back-home the rebound.

Justin Nichols was steady in net for the Storm. He made 17 saves on 19 shots.

Guelph won their second straight game to improve their record to 2-1-0-0.

The Storm will try to make it three straight on Saturday when they hit the road to face a division rival – the Owen Sound Attack.

Guelph is back at the Sleeman Centre on Friday October 10th. They will face off against the North Bay Battalion in a rematch of last year’s OHL Final.

– Guelph continued their hot play against the Whalers. The Storm went 7-1-0-1 in 10 games vs. Plymouth last season outscoring the Whalers 46-19

– Jason Dickinson has been tearing it up vs. the Whalers. In his last 10 GP vs. Plymouth he has 7 goals and 18 assists.

– Pius Suter had his first three point performance of his career. He looked right at home on the top line with Jason Dickinson at Tyler Bertuzzi