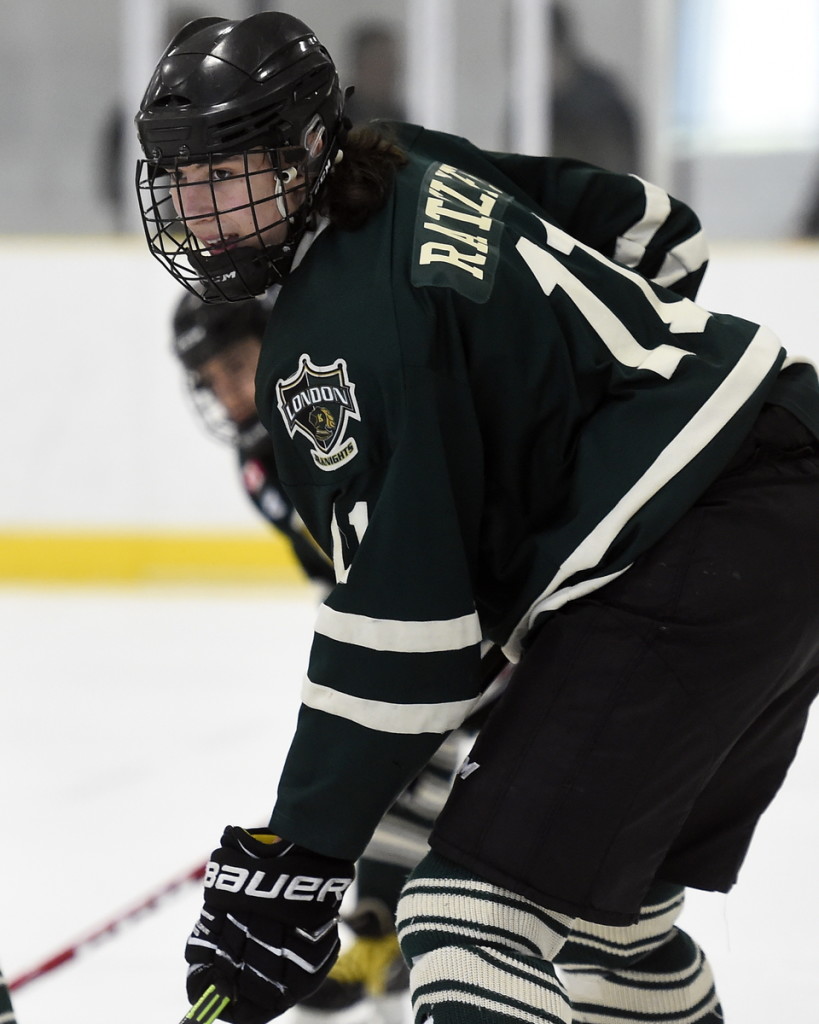 Before being selected in the first round by the Guelph Storm this past Priority Selection, Isaac Ratcliffe grew to love a game that wasn’t in his genes.

Isaac Ratcliffe has always stood out.

And that goes well beyond his six-foot-five, 183-pound stature.

“He was always tall,” Isaac’s mother, Elaine, explained, noting the 16-year-old’s noticeable size advantage. “But, just from the beginning, he always stood out.”

“He was barely skating and he could get the puck to the net,” Elaine continued. “He was three-and-a-half when he started skating, and he could score then.”

A story of an early knack for goal scoring fits ever so accordingly with the Guelph Storm’s first round selection in the 2015 OHL Priority Selection, as Ratcliffe’s most recent numbers emphasize nothing but consistency with a total of 49 points (22 goals, 27 assists) in 32 games with the London Jr. Knights in 2014-15.

Although, the now described as power-forward wasn’t always lining up on the offensive.

“He started out as a defenceman,” Isaac’s father, Al, said of the early years. “But because he spent so much time in the other team’s end, he was eventually moved to a forward when he was 11.”

No matter the starting position, Ratcliffe – the youngest of three boys – credits his oldest brother, Landon, for the ultimate beginning.

“[Landon] had a friend group who started playing – he was the one who really got me into playing hockey,” Ratcliffe explained, adding that his Dad was a basketball player. “I played my first hockey game when I was about five, and really since then, I haven’t stopped.”

Even before he was lacing up the skates, though, Al and Elaine recall another unique difference in their youngest son.

“He wasn’t one of those kids who would run around while we watched his brothers,” Elaine explained. “He would just sit and watch the games, end-to-end, from the time he was about two.”

Time evidently well spent, as Ratcliffe is now cemented in Storm history with the first step in the process – being selected 20th overall this past Priority Selection.

“It was amazing, my stomach just dropped,” Ratcliffe said of the moment he heard his name called by the Storm, adding he was left speechless for about five minutes. “Being accepted into an amazing and successful organization, it was the best day of my life by far.” 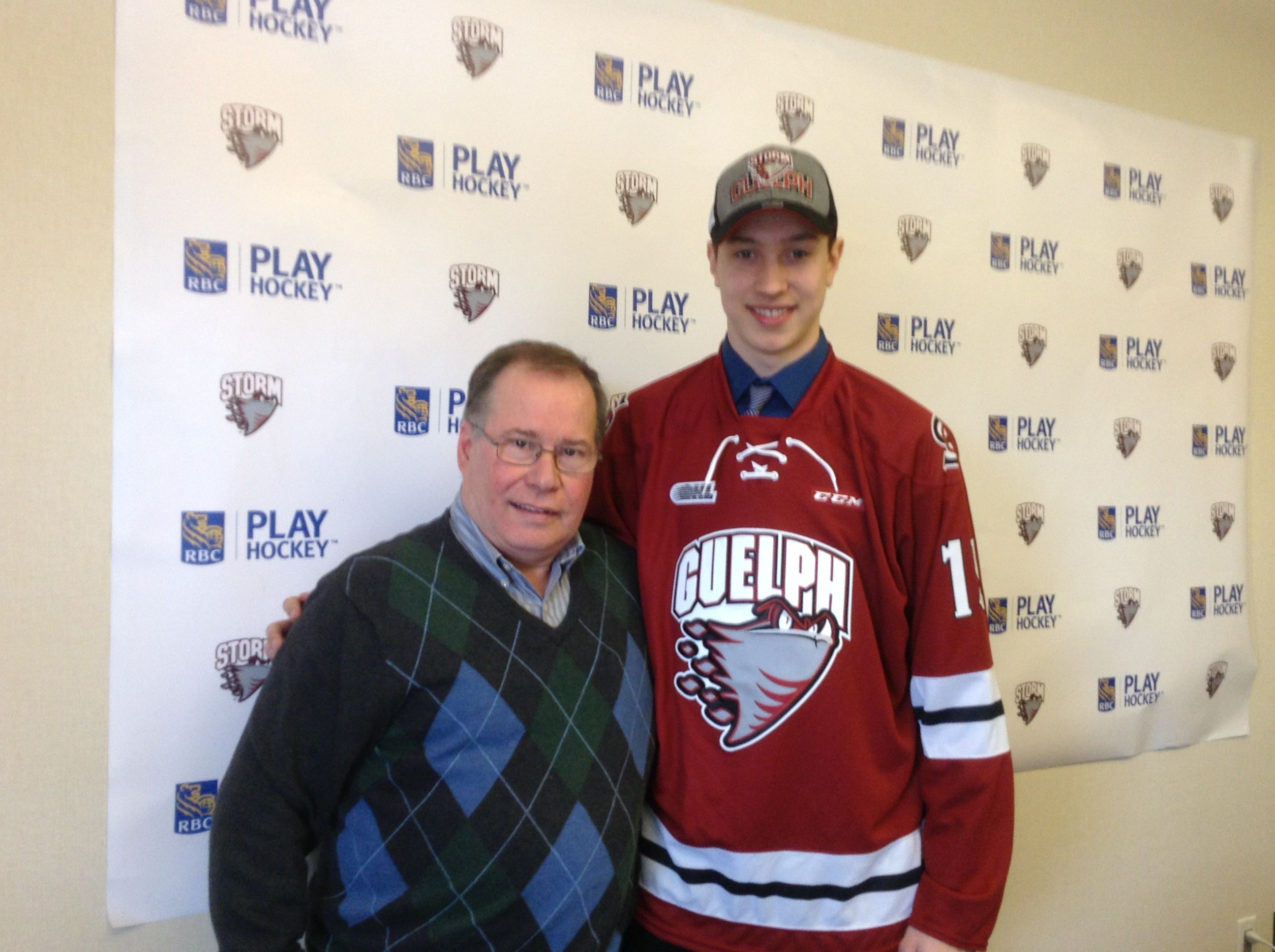 A native of London, Ontario, it took the winger next to no time to understand the inner-workings of Storm City rivalries, and simplify it to nothing more than a personal advantage.

“The rivalry just helps me out a bit more,” Ratcliffe said of the obviously heated-history between his hometown Knights and the Storm. “Now I can come home and play in front of a home crowd a few more times than a usual player would.”

Meanwhile, for Al and Elaine, a hometown rivalry was the furthest thing from their mind upon having their son selected by the Storm.

“We had no idea where he would fit in exactly,” Elaine explained of the thoughts heading into the OHL Priority Selection. “So when Guelph chose him, we were surprised, but then when we got there, we couldn’t have been more overjoyed.”

“The reception was unbelievable – they embraced not only Isaac, but myself and my husband,” Elaine continued, sharing that she knew her youngest son was now a part of an amazing family.

“They’ve been nothing but first class all the way,” Al added of the entire experience from the day of selection, to the prospect camp and more.

The reception off the ice has been significant for Ratcliffe too, sharing that through the likes of Jason Dickinson, Givani Smith, Matthew Hotchkiss, and, of course, a couple tweets here and there from others, he already feels a sense of belonging.

“Even though I haven’t played my first game, or stepped into the room, or even laced up my skates yet, they’ve already accepted me as a player,” Ratcliffe explained. “It just makes me really excited to get going with this organization.”

A deserved warm welcome, the traditional personalized jersey, and a signed OHL player agreement – all things checked off the list for Ratcliffe with training camp inching closer and closer.

Now, eyes are steadily focused on the challenges ahead.

“I want to go in there and play the best that I can,” the 1999-born forward said of his biggest obstacle, adding that he needs to work on strength heading into a league with bigger, older opponents. “I’m not going in expecting to be on the top line, I know I need to work for everything I get.”

With Ratcliffe centering in on what’s ahead on the ice, Elaine and Al hold and maintain an important perspective with the jump to major junior for their youngest son lingering.

“Isaac has such a passion for it – he still tells me today he looks forward to getting on the ice,” Elaine explained. “If there’s anything I can be most proud of, it’s that he can spend his life doing something he loves that much.”

“We were a basketball family,” the mother-of-three continued with a laugh. “We never thought our boys would be hockey players.”

Choosing a hockey stick over a basketball, surely a decision that will continue to stand out – much like the six-foot-five 16-year-old power forward has all his life.

As for that 16-year-old, there’s really only one thing on his mind.

“Getting the season started next year,” Ratcliffe said. “That’s what I’m really excited for.”

Favourite sport other than hockey: I’m going to have to say basketball.

If a movie was made about your life, who would you want to play you in the movie: I’d say Brad Pitt because he’s a good looking guy.

If you could have dinner with anybody, dead or alive, who would it be: Mario Lemieux.

Most embarrassing song on your iPod: I think See You Again by Miley Cyrus.

One place you’d like to travel to: I’d say Egypt.

One thing people would be surprised to know about you: When I was five years old, I was hit by a car.