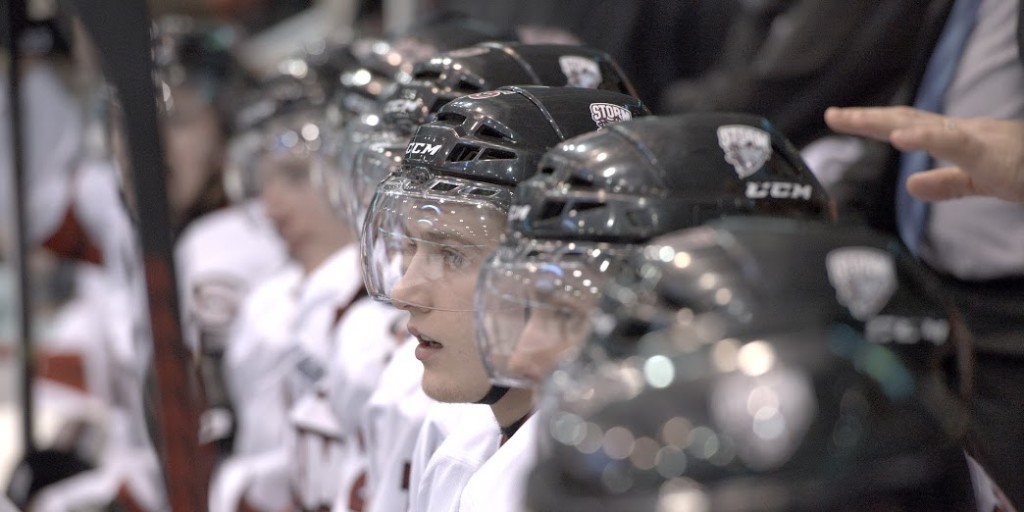 Behind Andrew Mangiapane’s hat-trick, the Barrie Colts defeated the Guelph Storm 5-1 Saturday night at the Barrie Molson Centre as the team won its eighth straight contest.

Mangiapane, who now sits third in the OHL with 39 goals, scored a goal in all three periods while Matthew Hotchkiss scored the lone tally for Guelph.

After skating to a draw for the majority of the opening period, the Colts would solve Bradley Van Schubert with 4:40 remaining.

Mangiapane netted his first of three on the night to give Barrie a 1-0 lead. The Colts’ leading goal scorer collected the puck in the left circle in the Storm zone before cutting to the net and wristing a shot short side between the blocker of Van Schubert and the left post.

Though they trailed in goals, Guelph had the edge in shots after the first 20 minutes, outshooting Barrie 12-9.

It wasn’t until there was 7:34 left to go in the middle frame that the home team extended their lead to 2-0. Mangiapane scored his second of the night when he finished off a nifty tic-tac-toe play with Julius Nattinen and Kevin Labanc, tapping the puck past Van Schubert from the left side of the crease.

Guelph native Giordano Finoro executed a nice give-and-go with Anthony Stefano before breaking behind the Storm defence and chipping the puck over Van Schubert into top right of net to give the Colts a commanding 3-0 advantage after 40 minutes.

Early in the third period, Guelph gained some life that was quickly shattered shortly after.

2:20 into the final frame, Matthew Hotchkiss one-timed a Givani Smith pass from the slot into the right side of the net to cut Barrie’s lead to 3-1.

Less than two minutes later there was more good news for the Storm as they were awarded a power play. However, that power play ended up doing them more harm than good as the Colts would score two shorthanded markers a mere 26 seconds apart.

Nattinen scored to make it 4-1 with a wristshot to the lower left side of the net and Mangiapane completed the hat-trick when he scored on a backhand-forehand breakaway deke as Barrie made it 5-1.

Any momentum Guelph had gained from their goal was dismissed with the shorthanded tallies as the Storm fell 5-1 in Barrie.

Van Schubert made 30 saves while Blackwood turned away 34 shots.

The Storm return to action on Monday when they welcome the Erie Otters for a Family Day game. Puck drop is slated for 2:00 p.m.

– Tonight’s game was the second and final meeting between the two teams this season. The teams split the season series, 1-1.