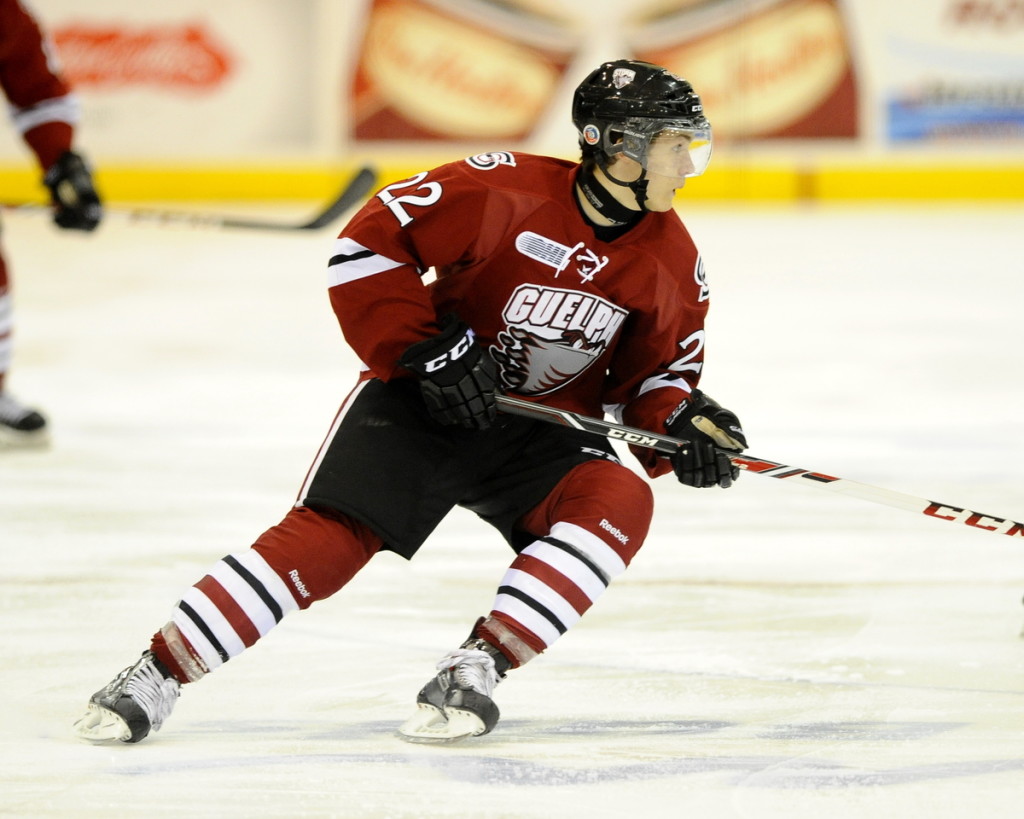 Leave it up to the team’s hottest goal scorer of late to lead the way to victory.

In a potential preview of a first-round playoff matchup and battle for home ice, the Guelph Storm’s Pius Suter put matters into his own hands Friday night.

Suter finished with three points and Dickinson finished with two, while Justin Nichols turned aside 26 shots in the victory. The Storm improve to an impressive 5-1-0-1 against Owen Sound this season, including a 3-0 home record.

The contest started out like one would expect from a potential first-round playoff matchup: fast-paced, tight checking, and intense.

Both teams traded power plays and generated chances, but it was the goaltenders who stole the show in the opening frame.

Both Flinn and Nichols were tested rather early and often in the initial 20 minutes, and each remained perfect heading into the first intermission.

Early in the second, the home team found themselves down two men when they took two penalties just 13 seconds apart.

Failing to gain momentum from the five-on-three kill, Owen Sound took advantage and scored the first goal of the night 4:22 into the middle frame. Schemitsch tallied for the visitors when he fired a wrist shot high over the glove of Nichols, giving the Attack a 1-0 lead.

The Storm tied the game at one when Dickinson carried the puck into the Owen Sound zone, skated around a defender, and put a shot off the pads of Flinn.

In the right place at the right time, Suter, at the side of the crease, banged in the rebound after consecutive whacks at the puck. It was Suter’s 35th goal of the season and 13th in his last 13 games.

Guelph managed to tie the game despite being outshot 11-3 in the period.

In the third, it was the Storm’s first shot just 19 seconds in that would give them a 2-1 lead and the eventual game-winner.

Shorthanded, Suter chased down an Attack defender, stripped him of the puck, and wrapped it around the net where he slid it between the legs of Flinn.

The goal was Suter’s third shorthanded tally of the season.

The Guelph defence and strong forechecking took care of the contest the rest of way, giving up only two shots to Owen Sound in the final frame.

However, they had a little scare when the Attack were awarded a power play with just 1:02 remaining in regulation.

With the net empty to make it six-on-four, Dickinson iced the cake with an easy shorthanded breakaway goal and giving us our final, 3-1.

The Storm captain currently sits third in the league with six shorthanded goals.

Both Suter and Dickinson now each have seven shorthanded points on the season, while Guelph has scored 15 times when playing down a man, ranking second in the league.

Guelph added to their point lead of the Attack in the standings and now sit five points ahead of them for fourth in the conference.

Guelph is back at it this Sunday, March 8, when they visit the Sarnia Sting. Game time is at 4:05 PM.

– Luke Cairns returned to the lineup after missing the last 20 games with mono.

– The Storm scored two shorthanded goals in a game for the first time since February 5 of this year against the Peterborough Petes.

– Both Pius Suter (3 goals) and Jason Dickinson (6 goals) registered a shorthanded goal and now sit in the top 10 in the league.