Spirit at Storm… after 20 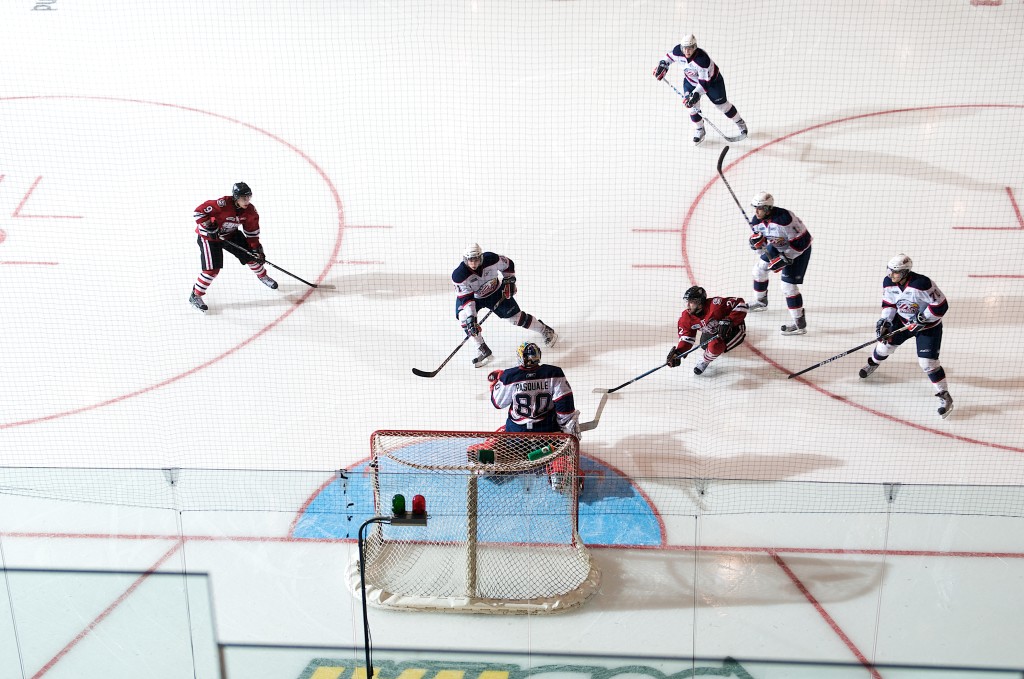 Friday night at the Sleeman Centre in front of a near capacity crowd, the Storm scored three goals in a span of 2:17 early in the third to roar back to a 4-3 win over the Spirit.

Brandon Foote got the nod in goal for the hosts and picked up where he left off in last night’s first star performance stopping 15 of 16 Saginaw shots.  The Spirit managed to slide one by him jumping on a turnover behind the Guelph goal and quickly hitting Tyler Murovich all alone on the doorstep.  The lead would last almost five minutes until the Storm managed the equalizer on their only powerplay of the opening twenty.  Sam Lofquist started the play dishing to Peter Holland at the top of the circle.  Holland’s shot was deflected by Michael Latta through Edward Pasquale for his 18th of the year.

The visitors wasted little time in the second grabbing their second lead of the game with Barry Sanderson and Jordan Skellet playing a little give and go.  Sanderson and Skellett crossed at the Guelph blueline and after Sanderson fed Skellett, the Spirit’s leading scorer returned the favour finding Sanderson streaking to the net for a quick shot that Foote got a piece of but couldn’t handle.  After the Storm failed to capitalize on a four minute powerplay, the Spirit doubled their lead to two jumping on a neutral zone turnover.  Dylan Fitze picked up his second point and first OHL goal in his first OHL game finishing a two-on-one for the third Spirit marker of the night.

Down two entering the third and with their leading scorer Taylor Beck in the box serving a 10 minute misconduct, the Storm jumped on the visiting Spirit early scoring three times to grab their first lead of the night.  Holland would spark the comeback with Guelph’s second powerplay tally of the night from Matt Sisca.  The Anaheim Ducks’ first round pick took a feed along the half boards and crept out to the top of the circle where he wristed a shot through traffic that beat Pasquale high.  Less than 30 seconds later, Carter Sandlak scored his second in as many nights to pull Guelph even with a nice redirect on the doorstep off a Cody McNaughton centering pass from the boards.  After setting up the tying goal, McNaughton did one better when he scored the eventual winning goal at 3:21 of  the third.  Rookie Connor Tresham started the play, legging a loose puck out of the Storm zone and hitting McNaughton in full stride.  Seconds later, McNaughton gave it back to Tresham, drove the net and took a return pass for a one timer and his 11th of the season.  The Spirit would have their chances to tie but Foote would kick out all six shots while Guelph would go toe to toe at both ends in a physical affair.

For the second straight home game, Peter Holland picked up first star honours with Cody McNaughton named star number two.  Final shots on goal in the game were 44-30 in favour of Guelph.

The Storm will rest on Saturday night before hosting the Erie Otters in an important Western Conference game on Sunday afternoon at the Sleeman Centre at 2 pm.  Tickets are available by calling or visiting the Storm box office or online at GuelphStorm.com.